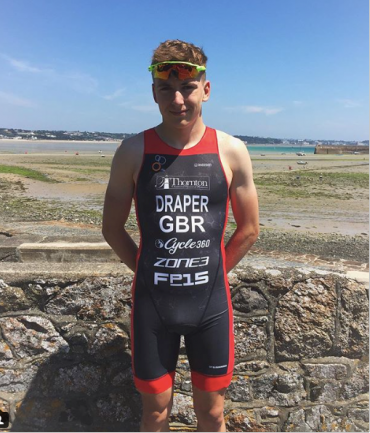 Nine months ago I decided to change my sport into the world of triathlon. It was always a thought, but for many years I loved racing my bike. I won the British National Championship when I was 12 and then the British National Madison championship on the velodrome when I was 16. From starting cycling in 2010, I have seen the podium at a national level more times than you could count on two hands. During 2017 I raced internationally for a team called HMT with JLT Condor. We did races like Tour of Flanders, Kuurne-Brussles-Kuurne and Tour of Basque Country; all momentous in their own right.

However, anyone who has raced a bike at a high level will understand the person who trains the hardest doesn’t often win the race. I’m not saying I trained the hardest out of everyone, as there were some outstanding bike riders, but I will say I never felt like I got what I was working for. Whether that be crashing, illness, race profiles, positioning or missing the break, it was a tough sport. 130KM races week-in week-out where I was crashing or missing the split partnered with monotonous training regimes in-between slowly whittled down my passion and enjoyment of bike racing. At the end of the 2017 season I took a step back. I looked at where I was; and where I want to be over the next 2, 3, 4, 5 – 10 years. That’s when I decided to become a triathlete.

Swimming I’ve started from scratch. September 2017 was the first time I’d went into a swimming pool lane with the intention of becoming a better swimmer. I’ve learnt so much; I also feel super privileged to have received support from Zone 3. Wetsuits, goggles, and garments. You name it, they have it, and they have been second to none with helping me, probably their slowest swimmer.

The cycling was supposed to simple. The last 10 months has taught me so much about balancing my training and something I can only have massive respect for the highest level of triathletes; especially iron men and women. I hardly touch my bike these days; although my form has hardly dropped. I use local races and time trials as well as tough brick sessions to keep this strength. Although in the Isle of Man Cyclefest I managed to snap my wheels. Using a relationship which started from the infamous Manx club run, HUNT Bike Wheels have saved me by lending me a pair of their aero road wheels for the rest of the season. As well as this I have begun working with Cycle 360 in order to help with what can only be described as the most expensive discipline of triathlon.

My mum used to run pretty fast. Maybe that has helped me. Since September I haven’t ran more than 3 times a week. 8 years of sitting on a bike for hours followed by sitting on a sofa because you’re tired results in some weak joints. Up & Running helped get me in a pair of trainers with arch support which helped my shin splints massively. It’s starting to come together now, I don’t get as much pain after I run.  My current 5KM personal best is about 15.45 and my 10KM is 32.58. I think I have potential to make improvements here.

I think the biggest lesson I have learnt in the past 10 months is how much training is actually possible when you can’t compete without it. I train smarter and more than I ever did when I cycled and I am still a long way off where I want to be. I look forward to seeing where this sport takes me. Sponsorship is a huge part of the success I have had so far and that’s why I’d like to add a massive thank you to my financial supporter, Thornton CFP. They have not only provided me with funding, but also confidence and advice where necessary. I will remember all of my sponsors from this year as every one of them have took a risk with me. I didn’t have a single triathlon result to my name when I approached them. But I can promise you I will when I represent them.