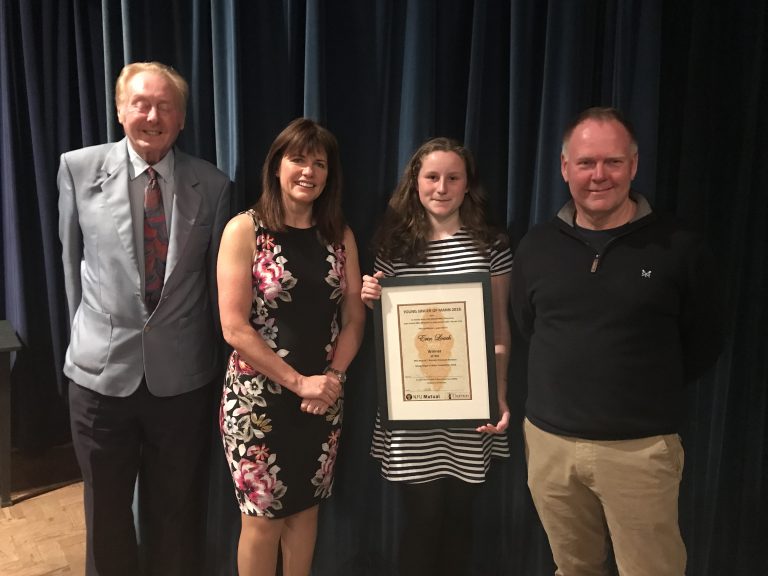 Erin Loach (15) was crowned ‘Young Singer of Mann 2018’ at the Erin Arts Centre today (Sunday 17th June 2018) taking home the trophy and top cash prize. Erin has been under the tutorship of Christine Bregazzi who was in the audience to witness her star pupil’s achievement. No stranger to singing success, Erin has competed in the Manx Guild for the past 3 years winning the Toronto cup 3 times and the Murray cup. She was already won the Manx Folk Awards for singing in Manx and sings in the Manx Children’s Choir. Port St Mary’s Evan Darroch was runner up and presented with £100. All finalists were presented with calligraphed framed certificates of their achievement.

The audience were treated to a fine selection by each of the 8 finalists who were all ‘of the highest calibre and hardest ever to decide a winner from in the history of the event’, so said John Bethell, head of the four-strong judging panel when he announced the results having taken more than 20 minutes to reach the decision. Each finalist had prepared a programme of up to 10 minutes which could include their set piece for the 2018 Manx Guild and one song unaccompanied, which not many chose to do. Marilyn Kissack provided the perfect accompaniment to each competitor, despite the huge variety of songs chosen. An unenviable music sight-reading task she was more than a match for.

In the first half Daisy Quinn (11) from Ramsey made a strong start with 4 pieces including Ellan Vannin unaccompanied. Zac Colligon (10) from Ballacottier School made the audience smile with his rendition of ‘Something Spooky’ as one of his three pieces. Lucy Shimmin (13) from Ballakermeen High School was next to sing with ‘the Fields of Athenry’ a highlight of her programme and she was followed by Erin Loach (15) also from Ballakermeen. Her unaccompanied delivery of the Manx Slumber Song in Manx Gaelic was hauntingly beautiful as one of her 3 songs.

The second half saw an upbeat and confident Evie Skillicorn (12) from St Ninian’s High School perform 3 songs including ‘Maybe’ from Annie, and she was followed by Evan Darrach (12) from King Williams College. Evan is a member of the National Youth Choir of Great Britain and he showed why with his 3 songs including ‘Will there Really be a morning’.

Kasia Ashton (9) from Douglas took to the stage to sing her 3 songs bringing a tear to the eye as she delivered ‘A Million Dreams’ from the Greatest Showman with a maturity beyond her youth. Tyler Kneale (14) of Bemahague School had to wait until last for his turn and didn’t disappoint with his 3 songs including audience favourite ‘We’ll Meet Again’.