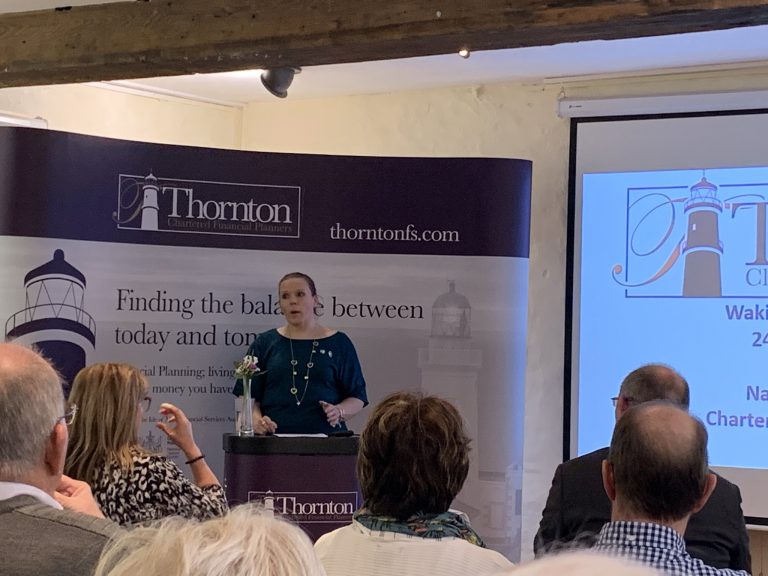 Despite the best efforts of Mannanan’s cloak of fog, and the inevitable travel delay, both our events went ahead last week.

Firstly, our guests were treated to an economic tour of what was 2019 and the current climate at ‘Brexit point’ by Chris Beckett, Investment Director of Quilter Cheviot, beautifully hosted by the ever capable St John’s Mill Conference Centre team. We have to keep pinching ourselves that we are lucky enough to ‘live’ here for a business address.

Thornton’s John Condon reminded us that the business will be 20 years old this October (more news and events TBA) and in those 20 years Isle of Man inflation has approximately doubled, a sobering thought for those ‘invested’ in cash.

‘Waking up to Dementia’

Taking advantage of Paul Ruscoe’s visit (Quilter Cheviot) we held ‘Waking up to Dementia’ as a lunchtime event, superbly organised by our own Natalie Bush.

With an estimated third of the population impacted by dementia, we believe preparing for such a diagnosis should be high on everyone’s priority list, so in conjunction with Quilter Cheviot, IOM Alzheimer’s and Corlett Bolton & Co, Thornton Chartered Financial Planners held our information presentation – Waking up to Dementia which covered the following.

-What dementia is and how this impacts financial planning – Paul Ruscoe, Quilter Cheviot.

-Legalities – all you need to know about Powers of Attorney, Court Appointed Deputies and the legal process – Sally Bolton, Corlett Bolton & Co & Adam Owen, President of the Personal Finance Society.

-Living with dementia and the support services available on the Isle of Man – Charlotte Greenbank, Isle of Man Alzheimer’s Society.

-Chris Howland, Thornton client who had recently been through the situation with his father and shared his perspective.

The Thornton team recently undertook training (delivered by Charlotte) and we are now ‘Dementia Friends’, but even we came away with ‘Things we learned’; as follows

1 – The process of putting an enduring power of attorney (EPoA) in place is relatively simple……while someone has mental capacity. However, the process of dealing with the someone’s financial affairs, who’s lost capacity and didn’t have an EPoA, is anything but simple.

2 – We have the option to make things simple or difficult for our loved ones. That choice is ours.

3 – We should talk more about our wellbeing and care wishes with our loved ones.  Today was all about raising awareness of getting your financial affairs in order but the point about talking about plans to relieve any potential ‘guilt’ was a great point.

4 – It’s better to prepare than to repair. It is better to have something in place, just in case, including the suggestion for everyone to complete a ‘financial passport’. (This is going on our website soon but email; mail@thorntonfs.com for a copy in the meantime)

5 – Beware of any Conflicts of Interest e.g. where the attorney and the ultimate beneficiary is the same person.

6 – The person needed to sign a EPoA should be asked to read about dementia but especially a paragraph that acknowledges that one of the most difficult tasks is to obtain signature from the recipient of the PoA/EPoA who generally think they are still capable or prevaricate on the issue (until it is too late).

Feedback from our guests;

1 – We already have an EPoA, however, I found out at the seminar, as we don’t have any children and if both of us were to be mentally incapacitated at the same time, the EPoA would not be of any benefit and a court official would be appointed.  We are now in the process of adding a family member to our EPoA’s.

2 – Many thanks to Thornton for organising the dementia presentation on Friday. Very interesting, Charlotte Greenbank was a particularly lively and engaging speaker. And the food was good too!

3 – My father is in a dementia care home in Leicester (vascular dementia) and my brother (who lives close by) has had to negotiate the UK flavour of enduring power of attorney, so very relevant. Luckily your first speaker didn’t list ‘genetic inherited’ as one of the causes, but at the age of 92, the probabilities begin to stack against you.

4 – Just a note to thank you and your team for the presentation today. Although I knew a lot of the information, there were new things that I learnt and timely reminders about others I have not dealt with yet. An added addition would have been for someone from a government department to have explained the financial situation with regard to people going into care.

5 – We found the afternoon very informative, some things we have already addressed but others, like the passport, we’d not considered and it is very useful to have that information.  I’m underway with filling it in!

If you’re reading this and have an idea about what other educational events you would like to see us put on, or indeed you’re not a client and want to engage with a proactive financial planning partner, please do get in touch.

Congratulations to our resident superstar Natalie Bush having just passed her final Advanced Paper (AF6 Senior Management and Supervision) and as a result of which becomes a Fellow Personal Finance Society, so we’re all off to the Isle of Man Insurance Institute dinner at the end of February where she’ll be presented with the top Education award, which she won for the first time in 2015 having achieved Chartered Financial Planner status.

The 75th Anniversary of the liberation of Auschwitz

This week marked the 75th year since the liberation of Auschwitz Concentration camp, and I can’t be alone in thinking that is a frighteningly short time ago, and should never be allowed to be forgotten especially with Britain exiting The EU; an effective peace treaty between previously and regularly warring European Countries.

You can watch the Auschwitz ceremony via this link. https://www.theguardian.com/world/2020/jan/27/auschwitz-watch-the-ceremony-marking-the-75th-anniversary-of-the-camps-liberation

It is oft said that actions speak louder than words, and I was fortunate to be gifted the book Ikigai some months ago (thank you Adam Owen) and perhaps pre-ordained to start reading this week. In its many pages of wise words (so far) I came across the story, of Victor Frankl, himself an Auschwitz survivor and the inventor of ‘logotherapy’.

Frankl had a goal to achieve, and it made him persevere and to survive. He arrived at Auschwitz carrying a manuscript that contained all the theories and research he had compiled over the course of his career, ready for publication. When it was confiscated, he felt compelled to write it all over again, and that need drove him and gave his life meaning amid the constant horror and doubt of the concentration camp, so much so that over the years and especially when he fell ill with typhus, he would jot down fragments and key words from the lost work on any scrap of paper he found.

So what is ‘logotherapy’? It helps you find reasons to live, and it seemed until recently to have fallen out of ‘fashion’.

Ikigai is ‘the Japanese Secret to a Long and Happy Life, and the other most interesting fact I’ve discovered from this book so far is that there is no word in the Japanese vocabulary that means ‘retire’ in the sense of leaving the workforce permanently!

Having a purpose in life is so important in Japanese culture that our idea of retirement simply doesn’t exist there.

It’s pretty ironic given that a central part of financial advice given to clients in this part of the world is based around our concept of retirement that our population’s levels of chronic illness and dementia is on the rise; maybe the Japanese, and Frankl,  have/had it right, after all.

Bill Dale and I finally met this week and we recorded his podcast on Island Influencers. Links to listen will appear on the website when it’s launched.  Bill’s passion for saving the environment through personal action and accountability is infectious and since initiatives like this and Blue Planet, we must all be attuned more to the effect our action has directly on our home;

Like me you probably heard about the first trip to the Antarctic by a journalist,  Justin Rowlatt who has been all over this weeks headlines.

Glaciologists have described Thwaites as the “most important” glacier in the world, the “riskiest” glacier, even the “doomsday” glacier. It is massive – roughly the size of Britain and it already accounts for 4% of world sea level rise each year – a huge figure for a single glacier – and satellite data show that it is melting increasingly rapidly.

There is enough water locked up in it to raise world sea level by more than half a metre.

And Thwaites sits like a keystone right in the centre of the West Antarctic Ice Sheet – a vast basin of ice that contains more than 3m of additional potential sea level rise.

Yet, until this year, no-one has attempted a large-scale scientific survey on the glacier.

Other podcast guests lined up so far are Rebecca George, CEO of the Isle of Man Chamber of Commerce, Adam Owen, President of the Personal Finance Society, and Thornton strategic adviser.

If you’d like to suggest a guest for me to interview whom you think is an Island Influencer, I’d be thrilled to hear from you; get in touch on our Facebook Page or via mail@thorntonfs.com

Have a great week ahead.